The rowdy but friendly tattooed people of the Shard of Ringfell are known as the Speyrfolk. They used to be known as excellent traders, exporting Ringfell's resources to the other Shards. But all the trading came to an immediate halt a good 70 years ago when the Speyrfolk's luck suddenly evaporated. All Speyrfolk outside of Ringfell suddenly died, while those on the board of shardship in the vicinity of the Shard turned fatally ill. Those left on Ringfell were spared, but anyone trying to leave, met the same fate; the Speyrfolk were chained to Ringfell, whether they liked it or not. The four families feared the worst and their paranoia turned inward, accusing each other of foul play. Thus Clan Belevitos and Clan Streidh forged an alliance in Cairnkegg, while Clan Solaryen and Clan Mortalis did so in Scourpool. For decades the two sides would fight each other in Cairnbog and Scourmarsh. The fighting took a backseat when another problem arose: the Berserker Disease. A nasty affliction turning Speyrfolk into mindless enraged "animals", killing anything that comes close. 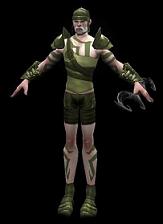 So currently the Speyrfolk are a rather helpless group of tattooed Ringfell natives, locked in a stalemate. Neither side wants to fight, yet they are convinced the other forces their hand. Meanwhile, the Disease is slowly but surely eroding their people.

Next time you get a speeding ticket, you might want to praise the fact that you aren’t living on a Shard. Crimes, breaking the law and every other kind of "unwanted" behaviour all results to the same punishment: ousting. Basically you are stripped from your citizen rights and thrown out of the Enclave. Good luck, hopefully we won’t meet again and please do not mind the wildlife; they might actually kill you for us.

The Ousting Law was an easy way to shift responsibility and resources back to the Enclave itself and the Enclave would only imprison persons they’d need sooner or later anyway. Anyone else though was kicked off the Shards, figuratively speaking of course. In truth, they pretty much stuck around and even traveled throughout the Shards as stowaways on shardships of House Silver. Some rose to a sliver of power or managed to work themselves back into society, but most of the time, Ousted are too stupid for that. The general line of thought being, that if you needed a life of crime, there would be better and smarter ways to satisfy your cravings, and not get caught. Those that are stupid enough to live their dubious ways in the open, deserve to be ousted.

They can come from literally every walk of life and are perfect cannon fodder. You can find them everywhere, but they never seem to be involved in the grand scheme of things. They let it slide; survival being their main reason for any kind of action. They don’t have a leader and no headquarters.

Well, there’s always one place where you could go as an Ousted: Rawhead Landing, a raft yard where all kinds of shady stuff take place. Some Ousted there still feel a kinship and generally those are thinking of turning the ousted into a true faction being able to make their voice heard against those who rejected them. Which would’ve worked tremendously if not for the fact that most Ousted try to fit in with another group...

The Brotherhood of the Glaive Edit

When an entire shard is under attack by a race of vile and evil creatures, who are you going to call? At Mount of Heroes the Enclave thought it wise to send various regiments of the Houses there to fight the Howlers; creatures made very clearly of flesh, but not exactly in a configuration that would invoke empathy. The war against these beasts was very heavy and out of the citizens fighting there a new faction arose: the Brotherhood of the Glaive.

It started out as a noble brotherhood founded by nobles and high ranking House members; its ideals of helping the Enclave and fighting the Howlers with sincere dedication held aloft as a shiny banner of victory. And for a time all went well. But there were those amongst the Glaive who use the brotherhood for their own purposes and within time those high ideals were shattered and the Glaive had grown fat over the backs of Enclave citizens. It all went utterly wrong when the Enclave intervened and demanded someone to take responsibility for all the wrongdoings.

At that point the Glaive turned hostile and all seemed lost: those who thought differently were ousted from the brotherhood and life itself by means of a sharp glaive. At that point they became an official enemy of the Enclave, and the Glaive started recruiting and educating Ousted to join their faction. Nowadays the Glaive are commanded by a single person from a derelict raft yard somewhere in the Deadspell Storm. At least that is what people whisper to each other.

The Glaive are a more focused group. The Ousted may be rubble, but under command of a Glaive officer they can become a more capable force. Many of the Ousted try to impress the Glaive by devising elaborate schemes to show their capabilities. The Glaive don’t care; they need mouldable troops. Writing for the Glaive is a bit like imagining to be Doctor Claw from Inspector Gadget. The Glaive are definitely organized, but that doesn’t mean everything within that organization is smooth sailing. Smuggling, raiding, stealing are standard Glaive fare, while they try to change the Enclave into what they call a democracy. Of course players will bump into them more then once, and who knows, maybe there’s even some of that noble blood left within their ranks. Of course there’s one faction which actually make having a certain kind of blood flowing through one’s veins a prerequisite...

The Arionites aren’t evil at heart; they’re just a bit zealous. House Torque’s Aryones Ithkari was once the champion of that House and a shining beacon for all those within the Enclave. But that all changed when he led the Enclave in an attack launched on the Vhuul at the Shard of Carnyx. Not many know what happened there exactly, but when Aryones returned from the Vhuul Hive he had taken up a new name for himself and was not at all that shining a beacon anymore. He had become Shadow’s Hammer, brainwashed by the Vhuul and a puppet of their whims. The Enclave sent in more forces to deal with him, but the strategy backfired and the forces fell under Shadow’s Hammer’s control.

Thus were formed the Arionites and war was waged between them and the Enclave. In the end Aryones Ithkari was caught and executed (the standard Ousting Law not really applicable here), but this only angered the Arionites and turned him into a martyr. If anything it had only made the Arionites stronger and war continued. The Enclave systematically tried to root them out many times, but they never were quite thorough enough. Even now some of them hide amongst Enclave citizens as spies waiting for the time to strike.

The only thing that binds all Arionites is their bloodline. Each member can trace his lineage back to a member of the initial Enclave forces that joined Shadow’s Hammer and became the first Arionites. If you are not of that lineage you are nothing to them. If you are a daevi, you’re even more worthless. They will attack anyone who makes themselves known as part of the Enclave. No wait, they will attack anyone not Arionite. And they will certainly not rest until the Enclave has been completely destroyed.

The Arionites are a vengeful lot and so form the evil side opposed to the Enclave, as they are so blinded by hate they don’t need much justification to attack anyone. Ousted and Glaive were all former Enclave-citizens one way or the other, they reason, so all must die. The Speyrfolk? Hah! Those collaborators are even siding with the Enclave!

The Arionites are quite simple in their approach to things despite their convoluted and mysterious origins, making every storyline concerning them filled with hatred and malice. They really are "the bad guys". As such they also have the dubious honour of being on literally everyone’s blacklist; Enclave, Ousted or Glaive it doesn’t matter everybody hates them. (It’s even debatable if the Vhuul like to have them around.)

Finding a powerful entity within the depths of the encased piece of rock you live in is wonderful enough. But it’s even more wonderful should find yourself able to communicate with it. Such is the glorious fate of the Veridan. These selected individuals, both human and Daevi, can bridge the gap between the Oracle and its followers; passing on its wisdom and guidance to those in need. Something all citizens of the Enclave gladly accept.

But it was not always like this. In fact, when the High Houses instigated the Ousting Law (funny how that thing keeps coming up again and again) the Veridan were very much opposed to it. The High Houses cared not, only taking into the account the good of the Enclave. Sure, the Enclave thrived, but it was a decadent society which had lost its way. The Oracle then summoned the High Lords of the High Houses through the Veridan to discuss these "problems".

Naturally the High Lords saw no problems at all with their lifestyle. Indeed, if there was a problem it lay with the Oracle, refusing to instil visions of new Shards and possibilities of the Deadspell Storm for the Enclave citizens. The Oracle responded to this, or rather it didn’t. It fell silent and the Veridan retreated within their palace to remain silent as well. The Enclave was without guidance and the High Lords, again, saw no problems at all.

This all changed not so long ago when Evhiel Muaun appeared in Quarterstone and the Oracle called out to her. Of course that led to all kinds of other problems like Muaun being tried by the Enclave, to be locked away in Hood’s Belfry, which in turn led to Tykaru’s Tyranny. But in the end the Oracle, through Evhiel Muaun, saved the Enclave from certain doom as it spoke to the citizens once again. From that day on the Enclave finally saw the truth and the Veridan were once again reinstated as the wise men and women through which the Oracle spoke. The High Lords as well were grateful for the Oracle’s wisdom and the idolatry of old was expelled and the trust between the Veridan, the Oracle and the Enclave was stronger than ever. A fact that still holds true even now.

The Veridan are, of course, rather mystical. These men and women are in direct contact with the Oracle and can talk both very direct or in obtuse riddles not fit for anyone’s mind. They can be pretty baffling but that only adds to their charm in my opinion. The most important player-related aspect of the Veridan is of course their ability to open up Ancestral Quests to players; living peeks into history showing the world before the Great Collapse. It’s like time-travel with all the grand battles, without all the nasty and messy side-effects.

Of course the Veridan, being messengers of the Oracle itself, hold a certain power within the Enclave. But the true power of the Enclave is held within the five High Houses.

The High Houses make the Enclave of the Five Sacrifices what it is. While they don't always see eye to eye, the general well-being of the Enclave is in each House's best interest. The individual Houses are explained in greater detail here

Retrieved from "https://spellborn.fandom.com/wiki/Factions?oldid=8811"
Community content is available under CC-BY-SA unless otherwise noted.